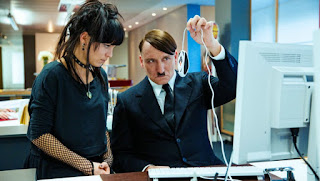 For a country who only recently re-legalized print of Mein Kampf, the blueprints to Adolf Hitler’s rise to power, the sheer existence of a movie, and previously a book, about Hitler coming back to life in the 21st century was certain to turn heads. Er ist wieder da, or Look Who’s Back in the English version, resides in some nether zone between comedy and cautionary tale. The movie is bizarre but only because it references the fact that the book exists prior (or during) the production of the movie. The continuity is quite confusing but luckily not actually that important to the film. First impressions force me to say this: if I didn’t know any better, I might guess that this is some dark satire about the current state of American politics with Hitler and a few of his supporters talking about “making Germany great again” (though there is some historical precedent) among other things like media opportunism and collective responsibility for the nastier elements of democracy 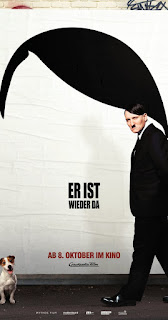 Aside from being in Germany when the movie was being promoted and having heard of it before, I knew very little about it going in. Some context would have been very beneficial, so let me help you out: the movie is a semi-scripted comedy that draws on many of the strengths movies like Sacha Baron Cohen’s Borat. Oliver Masucci, portraying der Fuhrer, essentially improved on-the-street interviews and interactions with regular German citizens. Everyone assumes that he is an actor playing Hitler but some unfortunate comments still seep out from people that are obvious Rechstradikale, right-wing German nationalists. This is most evident when he travels to Dresden, home of the anti-refugree movement PEGIDA. Maybe I should point out that Hitler disregards all current political parties in Germany except one, the Greens! He dismisses the conservatives as useless beer drinkers, the socialists as his old rival, and even the actual extreme right party as being full of useless degenerates. He only seems to like the Greens, the newish environmental party, because he associates protecting the environment to protecting the Heimat or homeland. It’s so on the nose that it really feels like the filmmakers are overdoing the “satire” at some points of the movie.

There is a story arch in the film and it focuses on the German media taking advantage of a ratings behemoth that would be Hitler coming back to life. Hitler, being the “real” Hitler in the movie takes his “role” so seriously that most people just laugh at him throughout the film. Only later do some people realize they’re making a mistake when it becomes clear that he is either the “real” Hitler or so committed the difference doesn’t really matter. This rings very familiar as an American having lost count of the number of times right wing ideology is written-off as a joke or not earnest in the press. From a filmmaking perspective, there’s also a lot to be critical about as it doesn’t really have a consistent tone, sometimes it’s a comedy, sometimes a rom-com, sometimes a drama, sometimes a 90s American TV show. The usage of tropes here kind of brought me out of the film a view times but the meta nature of the plotline gives me cause to forgive its apparent sloppiness. On the whole, it is a funny movie but I am curious how the novel differs as I highly doubt it mentions its own existence. Nonetheless, Look Who’s Back is good enough to get you to laugh at the current state of American and Western democratic politics on the whole, just don't think about it too much.
Title: Look Who’s Back // Er ist wieder da
Country of Origin: Germany
Genre: Comedy
Released: October 2015
Run Time: 116 minutes
Director: David Wnendt (Germany)
Starring: Oliver Masucci (Germany), Fabian Busch (Germany), Katja Riemann (Germany), Christoph Maria Herbst (Germany), Franziska Wulf (Germany), Michael Kessler (Germany)

This article was originally written in 2017 and has been posted with minor updates.