Carnival Ride in the Waiting - Journey to the West (2013) 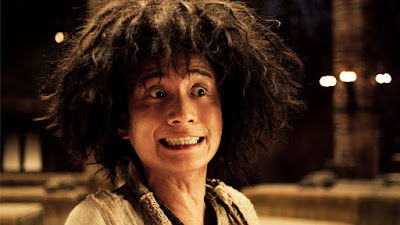 When I was doing a bit of initial reading for this movie, I was warned that not having a background in Chinese cultural history would severely limit my enjoyment of the
film.  Though I lost count of the number of times I chuckled and muttered a confused “what?”, I thoroughly enjoyed Journey to the West: Conquering the Demons, a Chinese film that serves as a sort of prequel to one of China’s oldest (circa 1592) and most well-known folk tales. If you are willing to taken on a ride, the movie will be an enjoyable themed rollercoaster. A friend from Taiwan actually referred to it as possibly China’s (much older) version of Lord of the Rings in terms of its popularity.

The story follows a young demon hunter by the name of Tan Sanzang (Wen Zhang), who is later becomes the hero of the original Journey to the West storyline. He is essentially still in training, made evident by his frequent failures or, at best, partial victories, over a slew of minor demons throughout the movie. The fights with the demons are action packed and very artistic in their choreography. As an example, think of something akin to the lightsaber fights of the prequel Star Wars movies but with fancier camera work, as it is based on Eastern martial arts swordplay. Also similar toStar Wars, the computer animated effects and monsters are very hit-or-miss. Sometimes it looks quite good but often times it looks cheap. It may just have to do with using such fanciful characters in a live-action setting.
You could say this is an action movie but it's also filled with comedy. It’s got quite a few goofy/slap-stick points and a bit of wordplay (that I imagine are funnier if you understand Mandarin), and overall you’ll find yourself laughing as often as you’re holding your breath through the action sequences. One major thing I should point out though is the comedy indicates this movie is for children and teenagers but the action scenes are often bloody and violent so, to be honest, I don’t know who this movie is targeted at. It might just be my Western sensibilities rather than any criticism of the movie.

There’s also a fun, but weird, romance sub-plot throughout the movie. A fellow demon hunter (huntress?) named Duan, played by popular Taiwanese actress Shu Qi, is much more competent than Tan and it seems her only inability is that of wooing Tan to be her future husband. He is solely focused on his goal of becoming a successful demon hunter and constantly rejects her throughout the movie. His monkish demeanor lends a spirituality to his character. Journey to the West has strong influences from Taoism, Buddhism, and Confucianism (though perhaps not really a religion itself, it’s an incredibly important cultural force in Chinese history).

Overall, Journey to the West, has a bunch of memorable and fun characters, a very campy sense of humor, some great actions scenes, and a lot of material that might encourage you to learn more about Chinese culture and history afterwards, if for no other reason than to assuage your near-constant confusion that will likely take place.