Mixed Media Meditation on Empire: The Cat and the Coup (PC Game)

The Cat and the Coup is eerie. No doubt the designers, Peter Brinson and Kurosh ValaNejad, intended on sending a message through this “game”. It is generous to call The and the Coup a “game” however. If anything, I’d argue it’s a rather simple series of puzzles set in a wonderful visual aesthetic and wrapped in with an off-putting score. I have to be careful about what I say as to not ruin the experience due to the game’s 10 to 15-minute run-time. In many ways, it’s a playable video, a Quicktime event for the modern era.
I must back up though. What is the Cat and the Coup and what is it trying to achieve? Well for starters, and certainly unsurprising given its visuals, it is first and foremost an art project. Second to that is a political message, but to be fair, it’s one worth sharing. The Cat and the Coup was developed at the University of Southern California and was partially funded by a departmental scholarship known as the “Advancing Scholarship for the Humanities and Social Sciences”. All this is to say that it is both a scholarly and artistic endeavor. Likely due to its university roots, I can happily say that the game is free to play and available on their website and on the Steam platform. 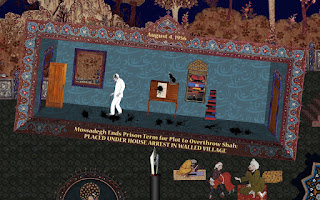 The Cat and the Coup tells the story of a CIA-led coup against the democratically elected prime minister of Iran, Dr. Mohammed Mossadegh, in 1953. The game builds a short narrative that serves as one explanation for the events that led to the ousting and house-arrest of Dr. Mossadegh. This coup led to the Shah’s short rule that also ended abruptly in the 1979 revolution – of which there is another game exploring these events which I intend to play. The overall message is clear, that the United States is guilty of playing the game of empire – the game even strives to point out that Dr. Mossadegh, similar to Ho Chi Minh's entreaties to President Wood Wilson 30 years earlier, initially requested support from President Truman.

The Cat and the Coup’s eerie music, played over a visual style that is initially stunning, fascinating, and often confusing, creates a very surreal experience for the player. I highly recommend checking this out if you have any interest in understanding current Iranian psychology towards the West, as the effects of this coup are clear and present historical points in the American-Iranian relationship. It’s free and takes less time than you’ve waited in a McDonald’s drive-through to play, give it a shot!
Title: The Cat and the Coup
Developed: Peter Brinson and Kurosh ValaNejad, University of South California
Released: June 15, 2011
Platform: PC and Mac
Available on: Steam and www.thecatandthecoup.com 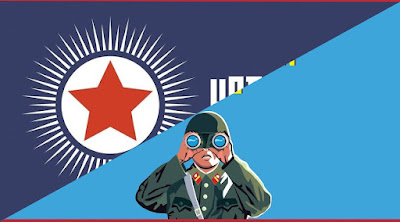 What Counts As Propaganda: North Korea from Two Perspectives

Note: Below I compare two documentaries on North Korea that came out in October 2015. They offer a sort of “blind men and the elephant” view of the Democratic People’s Republic of North Korea. With tensions in the East Asia rising due to tidal waves of bellicose rhetoric, might we investigate the nature of some of these words? Both Spanish documentarian Álvaro Longoria, and Russian filmmaker Vitaly Mansky, chose to tackle the immense North Korean propaganda machine by embedding themselves in it, albeit from different points of view. Both The Propaganda Game and Under the Sun came out in the 2015, riding on the heels not only of the mess of a release of the comedy The Interview, a film about the assassination of the North Korean leader. That three movies on one of the most secretive regimes in the world would come out within a year of one another seems odd but I imagine with recent events, we may see it happen again. Longoria takes a wide view of the situation on the small, heav