Blues from a Home of the Reds - Ana Popovic If you’re looking for some of the best blues music around, there are some obvious places to look: Chicago, New Orleans, Detroit… but Belgrade? I wouldn’t have believed it until I heard her but Ana Popovic of Belgrade, Serbia, could probably be Europe’s Susan Tedeschi. Popovic has been a rising star in the world of the blues in the last 20 years, especially after launching her solo career in the early 2000s. I was surprised to learn recently that American blues music has quite a following in the old Eastern Bloc countries of former Yugoslavia, East Germany, and Poland. According to a German colleague of mine, in the 80s, a number of American record labels effectively dumped a bunch of unsold albums from old blues legends on the other side of the Iron Curtain and this fostered a love of the blues that lasts to this day. 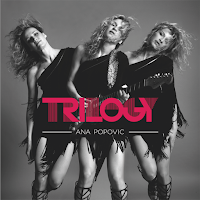 You won’t find Delta blues here but a more modern take fused with some contemporary jazz and driving rock backgrounds that might make Joe Bonamassa blush – he even makes an appearance on Trilogy’s “Train”. It’s hard to pigeon-hole the genre of Trilogy as it moves seamlessly from dirty blues rock, to soulful ballads, then takes a spin at a jazzy rock. Having played guitar since she was 15, she has cultivated a style that feels familiar but is certainly her own. You can hear influences of Carlos Santana and perhaps even Stevie Ray Vaughan with her crisp and clean guitar riffs creating a soulful energy that pervades much of the album.

Popovic has an earthy tone to her voice that is absolutely perfect for the genre. Having grown up in a family that encouraged jam sessions, it’s not at all surprising that she has found herself a part of many compilation albums honoring some of the legends and has even toured with the likes of B.B. King, and Gary Clark Jr. According to her website, even The Boss himself, Mr. Bruce Springsteen has described Ana as “one helluva guitar player”! Give Trilogy a listen and see if you agree, either way, you won’t be disappointed!
Artist: Ana Popović
Album: Trilogy
Country of Origin: Serbia
Released: 2016
Genre: Blues, Blues Rock