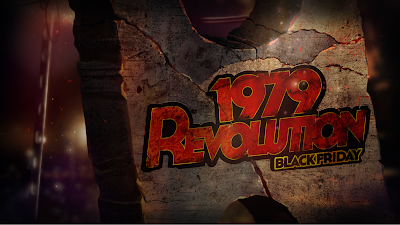 Jan. 13, 2020 - Given current tensions with the Islamic Republic of Iran, it seemed appropriate to speed up the posting of the Iran-themed articles. Please forgive any sense of opportunism, I believe there's much to gain from rebuilding American-Iranian relations from the ground up.

As I play certain independent video games, I repeatedly come across the same question: what makes a “game”? This question initially came up as I played the 2013 surprise hit Papers, Please, because the mechanics of the game are so droll that you begin to wonder why you’re even playing. Oddly, that is the whole point of a game like Papers, Please as you are literally simulating crushing bureaucracy. However, the question again arose during my writing of The Cat and the Coup, a “game” based upon the 1953 CIA-led coup against Iranian Prime Minister Mossadegh. I struggled to find fun in both games but they were both worthwhile experiences. Finally, this leads me to 1979 Revolution: Black Friday, another “game” set in revolutionary Iran, albeit 26 years after The Cat and the Coup. I certainly found enjoyment in Black Friday, but again, it wasn’t due to its game mechanics.

In Black Friday, you follow photographer Reza Shirazi, as he tries to capture the essence of the 1979 revolution against the notorious Western-installed dictator of Iran, the Shah. The game plays out much like a choose-your-adventure novel that many of us read in grade school, of course with a graphical update. You jump from event to event as you are being interrogated in Evin Prison, a dark place that housed numerous political prisons both before and after the revolution. Though the eventual outcome of the revolution is well known with the rise of Ayatollah Khomeini, the reality on the ground in Tehran was much murkier, as evidenced by the competing factions you meet throughout the story. The country was unified in its hatred of the Shah but the Islamist, Communist, and Democratic forces all had different ideas on what the future of Iran should hold.

The story is deeply personal though as even Shirazi’s family is divided on what should be done. His father was a former democratic instigator during Mossadegh’s time, his mother is comfortable in the current system, the favorite child, Reza’s brother, is an officer in the brutal secret police known as SAVAK, and his cousins are revolutionaries of varying zeal. It’s your job both to survive the revolution and help (or hurt) the revolution in your own view. The game has a somewhat open ending as your decisions do have an impact on how the story evolves – similar to a boiled down Mass Effect conversation wheel.

Finally, the game is filled to the brim with Persian cultural information. The game even has a codex that explains parts of Iranian culture and history, such as the significance of tea time and cultural norms when meeting strangers. There is a significant amount of Farsi, the national language of Iran, in the game as well. To be honest, it got annoying towards the end as it was a classic foreign-language trope to say something and repeat it in English (speakers of Farsi, I imagine will grow especially tired of this by game’s end). To be courteous, this could be seen as a language learning tool I suppose.

While the game aspects aren’t terribly fun and some of the controls could be considered clunky at best, I thoroughly enjoyed Black Friday as a rather unique and interesting way to learn about an event whose global impact can still be felt today. The cultural value of it cannot be understated as well, if you have any interest in Iranian history and culture, I’d be hard-pressed to find a better way to spend a few hours of your time.

This article was originally written in 2017 and has been posted with minor updates.

**As a note, the full game is usually $10 on Steam but mobile versions (which to my knowledge aren’t any different) are regularly priced at $5 on the Google Play Store and App Store. The controls are basic enough that I don’t think anything would be lost by saving your money and playing the mobile version.